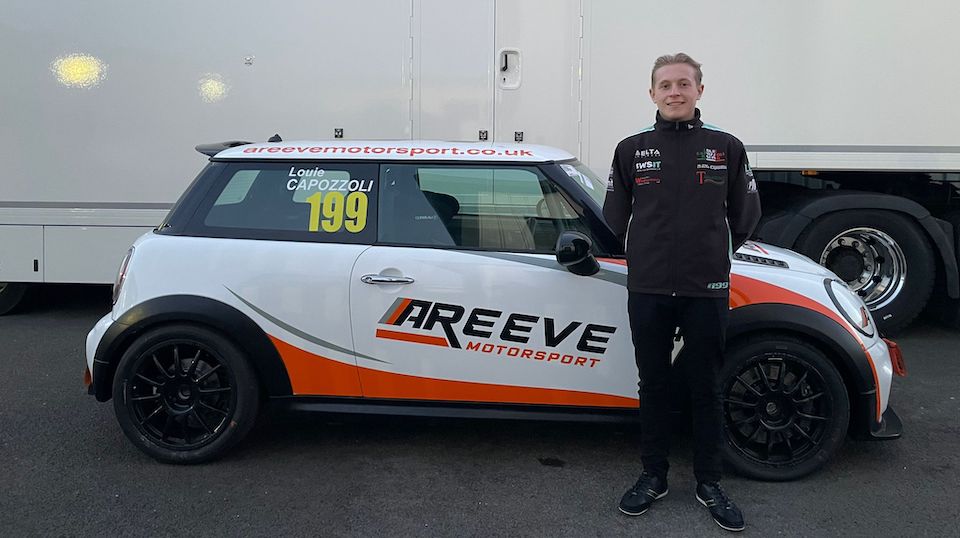 Teenage racer Louie Capozzoli will aim to go one better in the 2022 Quaife MINI CHALLENGE Trophy after officially confirming his plans for the new season.

The 19-year-old will switch from LDR Performance Tuning to AReeve Motorsport for his second full year in the highly-competitive Cooper class, with his goal being to try and better the runner-up finish he secured last season.

Capozzoli’s debut campaign was very much a season of mixed emotions that threatened to be derailed by an accident in round two at Thruxton, which saw his race car written off.

With a new car built ahead of round three, Capozzoli grabbed a podium finish at Brands Hatch to kick off a strong run of form that saw him regularly fighting towards the sharp end of the grid over the remainder of the campaign.

Particularly impressive was a record of three victories in the final two meetings, with a hat-trick of podium finishes in the Silverstone finale seeing Capozzoli grab second in the standings and also lift the Rookie Cup crown.

With champion Dominic Wheatley moving up to the JCW class, Capozzoli will be the highest-placed returning driver on the grid this year and heads into his graduate campaign amongst the favourites for the championship crown.

“I’m extremely excited at the challenge ahead in 2022, especially now I’m part of AReeve Motorsport,” he said. ‘It was a very difficult decision to leave LDR after such a successful debut season and I owe a huge thank you to Lawrence Davey, as well as my mechanics Hammy and Holly, who were amazing all year.

“AReeve Motorsport has a proven pedigree of winning championships in the MINI CHALLENGE and we spent a lot of time talking over the winter with Aaron to see if they shared the same philosophies as my dad and I. It soon became clear that it would be a good partnership, and seeing the workshop and facilities that the team has really sealed the deal.

“Last season was an amazing one for me, particularly because of the way we battled back from a tough start to end on a real high at Silverstone with the Rookie Cup title. Because we only had limited chance to test, every time I went out on track I was learning and I think I took big steps forwards as the season went on.

“The goal now is to take everything I learned last season and carry it into 2022, where the aim has to be to go one better than last year. I’m expecting it to be a tough season because there are a lot of talented drivers on the grid, but I’m confident that the support of AReeve Motorsport will allow me to challenge for the championship title.”

Team boss Aaron Reeve was quick to welcome Capozzoli into the team for the new season.

“We’re excited to add Louie to the AReeve Motorsport family,” he said. “Having seen Louie’s progression in the MINI Challenge Trophy and great battles he has had with our other drivers and previous champions, we are looking forward to working with him during the season ahead.

“We are confident that with our fantastic team and driver line-up, we can secure some great results this season, and can help progress Louie’s motorsport career further.”

The Norfolk-based multiple championship winning team has one space remaining – with entry – for the 2022 season for interested drivers.

Capozzoli’s debut in AReeve colours will come at Pembrey in early May, with the season comprising of 20 races spread across seven meetings – including rounds alongside both the British Truck Racing Championship and British Touring Car Championship.