A small turnout but a quality field of just 7 cars. Up to 12 laps of the Fosters circuit were possible on the wet track. Ben Dimmack was his usual quick straight away, but it took 10 laps to put in the pole time. Aaron Reeve was pushing him hard and his quickest time came on the last lap. If he pushed any harder a visit to the trackside would have been a distinct possibility. Rob Austin was his cool calm self and was happy with his time on his 10 laps for P3. Andy Montgomery in his R53 (it does sound so nice) was 2 seconds adrift with P4.

Chole Hewitt had a lucky break. She was not tested on Friday but found the car had a dodgy sensor when putting the car out on Friday. Luckily a spare was found and fitted in time for racing.

Yet another red flagged race with the safety car being deployed first. Tim Bill visited the crash barrier and looked like a big collision with the safety barrier. Luckily the front bumper was all that was damaged, apart from pride. The car was too out again at the next race. But with the time taken to recover only 4 laps were possible. Ben Dimmack in P1 followed by P2 for Rob Austin and P3 for Andy Montgomery. Chole Hewitt had a great race and kept Neil Ginley at bay for the whole race while Aaron Reeve, who spun off in the first lap tried in vain to catch up the pack. Not much real racing but the weather just cannot be controlled.

Last race of the meeting, and an unfortunate one for Aaron Reeve. Opening lap in the wet all the cars drive into Fosters, one of the cars, with a little too much speed for the wet track has contact with another car, spins off, taps Aaron on the way back onto the track and over his car goes. Red Flag while they recover the car. This, unfortunately, took a long time owing to the substantial damage to the car and Aaron. Aaron was taken to Hospital by Air Ambulance. The great news is, that apart from many bruises, he was discharged. The race restarted less the 2 cars involved in the incident. Rob Austin shot off like a bullet from Andy Montgomery who had Chloe Hewitt in hot pursuit. Chole showed a good bit of race craft and pulled out a 3 second from Tim Bill. So a P1 for Rob Austin, P2 for Andy Montgomery and P3 to Chloe Hewitt, her first trip to the podium. What joy for the Zoo racing team. Lots of tears, hugs, congratulations to Chloe. Turned what was a dramatic event into a happy ending for some. 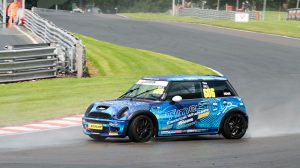 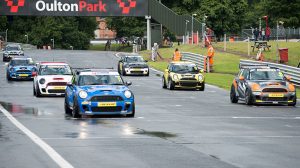