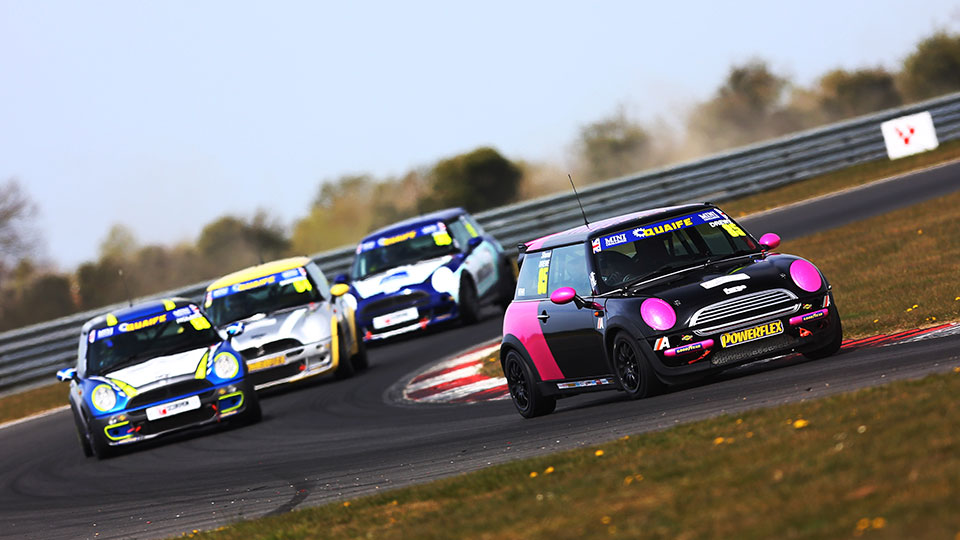 Shanel Drewe will hope for a successful season both on and off track after making her debut in the Quaife MINI CHALLENGE Trophy at Snetterton.

Shanel is the only female driver on the grid for 2021 having joined forces with AReeve Motorsport for what is her return to competitive action for the first time since 2017, when she finished as runner-up in the Road class of the Michelin Clio Cup Series.

With only limited pre-season testing, Shanel – who works as a performance driving instructor – qualified in 28th place on the grid and found herself in the thick of the action across the two races, where she picked up a brace of 25th place finishes.

However, her improvement across the course of race day was reflected in the fact that her quickest lap in the second race of the weekend was a full eight-tenths of a second quicker than she had managed in qualifying.

That came despite the fact she was running in traffic throughout, and was fighting back through the order after being knocked offline on the opening lap – which saw her lose a number of places.

“I came into the weekend just wanting to get a race finish and plenty of experience as I haven’t been in a race seat for three years,” she said. “Never mind having to shake the car down a bit, it was always going to take some time to shake me down again!

“I feel I’ve been involved in some good racing and have only improved as the weekend has gone on and I’ve got used to the car, so hopefully things can keep going in that direction.

“I work around race tracks all the time but it’s nice to get behind the wheel and really push hard in the races, which is what I love to do. This for me is home and it’s been a long time since I’ve been racing, so it’s nice to be back.

“Hopefully I can get as much time in the car as possible and continue to make progress.”

As well as her performance driving work, Shanel is an ambassador for The Community Driving School; a not-for-profit initiative created to help people from a range of backgrounds – such as those on low wages, unemployed or dealing with mental health problems – to earn a driving licence.

Pupils are able to access funds to pay for lessons in exchange for taking part in local community based work programmes, with Shanel hoping to use her entry into the MINI CHALLENGE Trophy to raise awareness of both The Community Driving school and of wider mental health as a whole.

“Mental health is an important thing for me as I remember on my first day at work, I was assaulted by a male customer,” she said. “That is why I am really getting involved with the cause of mental health, as there are still problems for females who are working in a male dominated world that aren’t quite touched upon.

“I’d like to raise awareness for those women – and those men who are in female dominated industries – to show that no matter what you might face, you can still achieve what you want to achieve, and shouldn’t let your dream go.”

In order to try and secure the support to compete in a full season, Shanel has launched a special ‘Raise the Roof’ campaign to provide people with the chance to sponsor a square on the roof of her car, with a percentage of the funds being given to The Community Driving School to support its ongoing work.